Welcome to the first issue of the new Science Visions newsletter! Earlier this month, we voted to transition our Science Visions blog into a quarterly newsletter, which will be delivered through the Women’s Caucus listserv and archived here on the PSA Women’s Caucus website. Science Visions will be issued in November, February, May, and August, and will continue to feature both news from the Caucus and short articles of interest to our membership. To suggest an article idea, submit a feature, or get involved with the editorial board of Science Visions, e-mail Julia Bursten at jrbursten@uky.edu.

This issue contains highlights from our 2018 Business Meeting and other important information from Seattle. It also features our Fall 2018 Highlighted Philosop-Her, Lauren Ross. 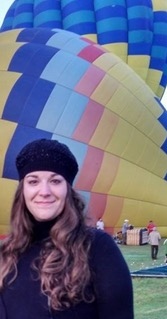 Sarah Roe
Sarah is an assistant professor at Southern Connecticut State University. She received her PhD from the University of California, Davis under the support and supervision of Professor Roberta Millstein. Sarah is an active council member for the American Association for the Advancement of Science-Pacific Division, where she serves as chair for History and Philosophy of Science.

Her research interests include philosophy of medicine, philosophy of biology, and science and values. Much of her current academic research, in some way, emphasizes or focuses on minority populations and at-risk populations. For example, her current book project, The History of Female Medicine and the Rise of Technology, explores the complex relation between (1) how we view women as a society, their role in medicine, and the acceptability of medical practices regarding women, and (2) how society’s interest in advanced technology promoted a less personalized form of medical practice. The purpose of the book is to gain a clearer picture of how societal values regarding medical technologies have come to shape the importance of women and their health within our contemporary society.

As the Director of the Research Center on Values in Emerging Science and Technology, a center comprised of science and philosophy faculty members from across the state of Connecticut, Sarah has made it her mission to focus on women and other historically under-represented groups and their participation within the sciences and philosophy. Under her directorship, the center proudly hosts a number of public events, all of which discuss and emphasize the challenges facing women in academia today. For example, this fall semester the center will host two exciting events to promote diversity within the sciences, namely Dr. Alinda Mashiku’s (Aerospace Engineer NASA) presentation as well as a lively roundtable discussion regarding the status of women and minorities in STEM/STEAM.

Sarah is the proud recipient of the J. Philip Smith Award for Outstanding Teaching. Beyond her passion for teaching philosophy, Sarah has crafted and begun offering guest lectures on the importance of diversity within academia for her home institution.

2018 Prize Announcements
Congratulations to our 2018 honorees!

2018 PSA Women’s Caucus Prize in Feminist Philosophy of Science
Beyond Biofatalism: Human Nature for an Evolving World, by Gillian Barker 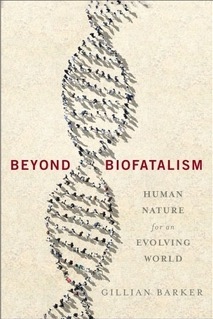 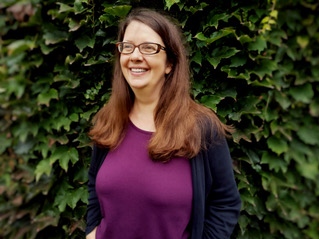 Beyond Biofatalism and its author, Gillian Barker
Gillian Barker’s Beyond Biofatalism: Human Nature for an Evolving World (Columbia University Press, 2015) is a remarkable synthesis and re-examination of over three decades of ongoing work in philosophy, evolutionary biology, and the social sciences, on the scope and limits of evolutionary psychology, and its import for addressing social and economic inequalities and responding to the coming challenges associated with climate change. The book offers a well-conceived, illuminating, and beautifully written demonstration of how a balanced, careful, but critical assessment of evolutionary thinking about human behavior matters in the context of social and political philosophy. Barker brings an original perspective to debates about "human nature" and cost-benefit thinking in the context of discussion of sex roles, altruism, and outgroup antagonism. Many evolutionary psychologists make assumptions about the immutability of human nature that are neither decisive, given the evidence, nor consistent with developmental biologists' appreciation of phenotypic plasticity, the complexity of reaction norms, and the importance of niche construction.

Beyond Biofatalism yields a persuasive and important line of argument suggesting that human behavior is far more flexible than evolutionary psychologists tend to suppose. The book is fundamentally optimistic, using this conclusion to suggest that evolutionary psychology has underestimated the prospects we have for change and improvement in all our lives. Barker connects a variety of different literatures that are typically not drawn together in philosophy, including work by philosophers of biology on evolutionary psychology, development, and genetics; work by social scientists on behavior and social roles; and work in political philosophy on justice, capabilities, and inequity. Beyond Biofatalism exemplifies the scope and power of feminist approaches to philosophy of science, both within the philosophy of science and across an array of disciplinary borders.

Additionally, “Discrimination and Collaboration in Science,” by Hannah Rubin and Cailin O’Connor (Philosophy of Science 85(3): 2018) has received an Honorable Mention for its intersectional focus and innovative methodology. This article engages strongly with literature and themes central to feminist philosophy of science by employing game theory to demonstrate that minority status negatively affects epistemic authority in academic collaborations and to underscore the epistemic merits of diversity in collaborations.

The 2018 PSA Women’s Caucus Prize Symposium, organized by Anna Leuschner and Greg Lusk, was selected from a very competitive pool of applicants for its exceptional quality and relevance to our membership. “Climate Science and Public Interests” addressed the broad question of how the practice of science should be modified in the hopes of better engaging and reaching non-scientists. This symposium elucidated whether there are specific communicative strategies, political behaviors, or methodological choices that would help to ameliorate the current problems. The symposium featured work by five women and responded to work by women philosophers of science and women scholars in cognate fields. Additionally, this symposium’s socially engaged topic area and pluralistic approach highlighted methods held in high regard by the Women’s Caucus and championed by feminist philosophers of science. 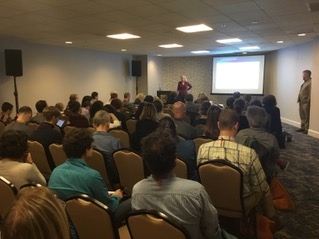 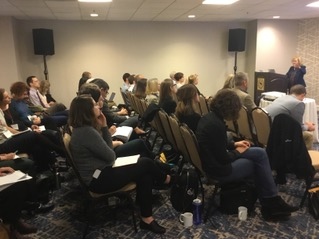 Women’s Caucus Work on PSA Meeting Climate and 2020 Harassment Policy
At our 2016 Business Meeting, we formed a committee to improve the climate for meeting attendees vis-a-vis harassing and biased behavior. The 2018 PSA meeting included a respectful-conduct statement that all attendees were asked to acknowledge during registration, and all attendees received in their registration packets a flyer with tips on bystander intervention to reduce biased and harassing behavior.

We are also very happy to announce that the PSA Governing Board has approved an enforceable Harassment Policy that will take effect at the 2020 meeting in Baltimore. This vote took place at the Governing Board meeting at the conclusion of the 2018 PSA meeting.

Many thanks to Janet Stemwedel for her hard work on all of these efforts, and to the members of the Governing Board for their support of and dedication to this issue.

On-Site Childcare: Share Your Experience!
In 2014, the PSA committed to offering on-site childcare at its 2016 and 2018 meetings. Now it is considering whether to continue the service in 2020 and beyond. The service cost approximately $5000 at each meeting, and it appeared to be well-received by users. The Governing Board is very interested to hear from users about their experiences as the Board considers the future of this service, and to hear from PSA members about whether this service should continue. If you have thoughts on the future of on-site childcare at PSA meetings that you would like to transmit to the PSA Governing Board, please e-mail Anya Plutynski, aplutyns@wustl.edu, by Feb. 1.

Inclusivity and the Future of the Caucus
Registration at PSA meetings has doubled since 2008, and in that time, attendance at Women’s Caucus meetings has grown nearly fivefold. As a result of this population shift, the co-chairs of the Caucus felt it would be constructive to begin a conversation about how the mission of the Women’s Caucus intersects with the need for support within the PSA for other underrepresented groups.

Before the 2018 Business Meeting, we conducted a survey exploring attitudes on intersectionality and inclusivity within our membership, and during the meeting, we held a discussion about whether to expand the Caucus’ mission to serve other underrepresented groups. There is not univocal consensus on this topic, and members shared rationales both for and against expanding the Caucus’s mission. This discussion is summarized in the minutes of the meeting.

The assembly voted to develop a series of proposals regarding the role of the Caucus with respect to efforts to support other underrepresented groups, which will be brought to the 2020 Business Meeting. More information on these developments will be shared in a future edition of Science Visions. 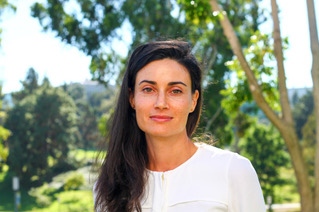 Lauren Ross is an Assistant Professor in the Department of Logic and Philosophy of Science at University of California, Irvine, where she has been since 2017. Lauren is a philosopher of science focusing on causation and explanation, especially in biology, neuroscience, and medicine.
Lauren completed her dissertation at University of Pittsburgh in History and Philosophy of Science with Jim Woodward and Ken Schaffner. Along the way she earned an MA in bioethics, also from Pittsburgh. After graduating, she spent a year as a postdoctoral fellow at the University of Calgary where she was a co-investigator on the grant ‘From Biological Practice to Scientific Metaphysics’.

Lauren’s pathway into philosophy was an unusual one. Before her PhD, she completed an MD, originally intending to go into medicine. After deciding to make the change, she was able to draw on her in-depth knowledge of medicine in subsequent philosophical work.

She has published in journals like Philosophy of Science, Biology & Philosophy, and Synthese, and spoken widely both nationally and internationally on her work. Lauren has also served the discipline by co-organizing several workshops.

Lauren enjoys running, going to the beach, and spending time with her foster dog Theo.

Every quarter, we feature a woman philosopher of science who has been nominated by other Caucus members to be highlighted. We alternate between early- and established-career features. To submit a nomination, fill out the online nomination form here.

Notes on Listserv and Social Media
The listserv is the primary means of communication we use to address our membership and conduct business between meetings, including elections and votes on policy.

The listserv also serves as a means of advertising job postings and other opportunities of interest to our membership. Any subscriber may post a message to the listserv by sending an email to psawomenscaucus@ucdavis.edu. More information about managing delivery preferences can be found here: http://womenscaucus.philsci.org/listserv

We also have a Facebook group! Search "PSA Women's Caucus" and request to be added. Don't worry, we'll add you! We just want to filter spam and trolls.

Get Involved!
The Women’s Caucus has a number of committees and volunteer opportunities with current openings, including our prize committees, Science Visions writers and web-savvy folks, the Underrepresented Philosophy of Science Scholars program, and more. If you want to help out, suggest an action, or raise or issue, please contact our Co-Chairs, Anya Plutynski (aplutyns@wustl.edu) and Sarah Roe (roes1@southernct.edu).

Thanks!
Many thanks to all our business meeting sponsors, volunteers, and behind-the-scenes-ers, including: the University of Calgary Philosophy Department, the Minnesota Center for the Philosophy of Science, Elsevier, the Patrick Suppes Center for the History and Philosophy of Science at Stanford, the UC–Davis Department of Philosophy, the University of Pittsburgh Department of Philosophy, and individual donors for sponsoring our lunch meeting; Sandra Mitchell and the PSA Governing Board for their support of dependent care programs and anti-harassment initiatives, and their continued support of the Caucus; Janet Stemwedel and Karen Zwier for their service as secretary/treasurer and web-mistress, respectively; Alisa Bokulich, Soazig LeBihan, Darcy McCusker, and Ayelet Shavit, for their service on the Diversity and Outreach Committee in the 2014-2016 interim; Cailin O’Connor for managing the Highlighted PhilosopHer series; and PSA Executive Director Jessica Pfeiffer, for invaluable assistance with all our conference activities.